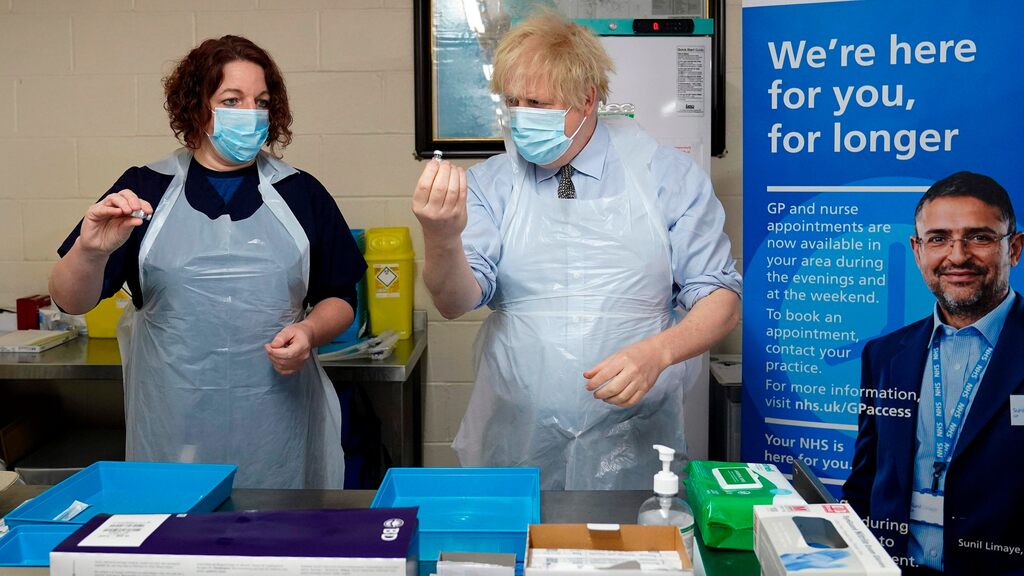 He does this every Wednesday.

British parliamentary democracy has a perennial component that the Prime Minister and opposition leaders must try to place each other in the House of Representatives every week.

Yes, he may have said this at some point … but this was not the official line of his party …

And Kerr Starmer has to wriggle.

Boris Johnson government It has received scathing criticism at nearly every point during the pandemic, and Britain has some of the highest death rates in the world – but the vaccination program in particular looks like a political victory. To Boris Johnson.

And it means a lot: Brexit.

On January 31, France vaccinated 4,560 people. The United Kingdom vaccinated 319,038 people. For many Britons, such figures became somewhat similar to the outcome of one form of continuous international football. It is very interesting to compare ourselves with the European Union because one recently broke away from the European Union. In situations like this, get a little obsessed with your ex and show how well you manage yourself.

A crossing cartoon shows a Briton sitting up to have his vaccine. “I was actually against the vaccine until I realized that if I got vaccinated it would bother the European Commission,” he tells the doctor.

Right-wing British Newspapers The vaccine excelled in the national headlines: “European Union, what?” And another needle in the arm for Britain. Meanwhile, the left-wing magazine The New Statesman is publishing an article by former Greek Finance Minister Yannis Varoufakis, which you may remember from the euro crisis. Varoufakis is now writing to an audience of the British left about the relationship of the EU vaccine failure (in his view) to the democratic deficit in the Union.

But for most Britons, the country’s successful vaccination program is often long-awaited evidence that their country is indeed working. No matter what one thinks about Boris Johnson, his government has undoubtedly succeeded in something, as many believe.

The UK government’s healthcare system that does vaccinations is a popular institution. Just like the University of Oxford, which developed one of its vaccines with Astra Zeneca, is a respected British institution.

Many Britons are a bit proud. It’s been a while since the last time.

The big reason That the United Kingdom leads the European Union in the vaccine race is related to the availability of vaccines. The enterprising capitalist government has appointed Kate Bingham to handle the vaccine negotiations and has already signed an agreement with pharmaceutical companies this summer. Of course, the European Union countries could have done the same legally, but in practice, the political pressure to move forward jointly through Brussels was significant.

Britain ran its own race.

But is this morally correct? If vaccine availability does not improve in the European Union, healthy 40-year-old Britons will be vaccinated earlier than many Europeans at risk. Is this really a good way to dispense vaccine doses? This was the background to the big battle between Brussels, London and AstraZeneca this week.

The European Commission demanded Acquire the vaccines produced by AstraZeneca in the UK. This came after Astra Zeneca announced that it would not be able to deliver the expected number of doses to the European Union as early as the end of March. Brussels was furious. How can Astra Zeneca give the British their promised doses but not the EU? What does the British convention really look like?

Yes, the British government did not want to say that.

Due to Brexit, there is basically a bad mood between Brussels and London. It caused the whole thing to escalate quickly. Brussels introduced controls to know the number of vaccines leaving the European Union, describing it as a “measure of transparency”, while others described it as a “targeted export ban.”

In Britain, one cannot generally understand the rationale behind the anger. If we reach an agreement three months before the European Union, are we clearly ahead of the waiting list to get vaccinated? What are they arguing about?

Many believe in the UK That the country has risked its vaccine policy, and if you take a calculated risk, you also have a right to a payout from it if everything turns out to be working. Otherwise, no one will take any risks.

Brussels negotiated for a long time with pharmaceutical companies, while the British held that it did not matter if you bought a vaccine for 10 or 30 euros per dose. Every day that goes by without this dose expiring in someone’s arm costs too much. It was simply more important that it went faster than everything went well.

The British performed a fundamental analysis of the pollen race as a fast-paced race.

In the European Union, it was seen as a marathon.

There was even a phase in the struggle where Boris Johnson had to assume the uncommon role of the “adult in the room”. The European Commission has threatened to use one of the emergency mechanisms contained in the Brexit agreement to stop the transfer of vaccines to the UK across the border with Ireland. This is very sensitive because the border with Ireland is the controversial border of Northern Ireland. It was the dangers of this kind of short-term political game that made many people anxious that Brexit might threaten peace in Northern Ireland.

The European Commission backed away quickly.

But the damage has already been partially done.

Britain is starting slowly Come to the realization that even if you yourself already reach herd immunity in July, the country will not be safe until the rest of the world is safe.

From February 15, the UK will be forced to suspend a ten-day quarantine at various aircraft hotels in order to enter from several countries. And, of course, the fear of new mutations behind it.

Of course, it can only be fun in the British tabloids to provoke France about their lack of vaccinations. Of course, it would be nice if so many Brits felt that their country was doing better than its surroundings. But there comes a time when the fun is no longer.

Not even to the right-wing British newspaper headlines.

World Health Organization: The number of infections in the world is decreasing