Apple CEO Tim Cook has confirmed that the company will donate to flood...
HomeWorldTens of thousands...

Tens of thousands protest against the Myanmar army 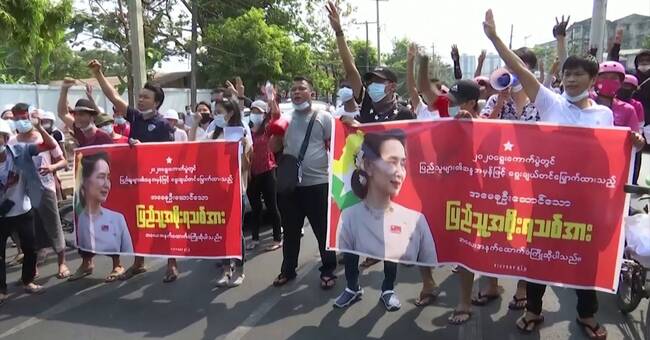 Demonstrators chanted “Down with military dictatorship”, waving red flags, the symbolic color of the National League for Democracy party that ousted Aung San Suu Kyi, who won the November parliamentary elections. However, the military did not concede victory and claimed fraud in the elections.

Protests have grown near Rangoon University. This is despite the fact that the internet has been shut down in order to curb criticism of the military coup. Protests also erupted in the greater Mandalay city.

He gave food and water

Onlookers offered food and water to the protesters, and many raised three fingers in the air in a protest gesture. Meanwhile, riot police closed roads and installed water cannons.

Thousands of protesters marched through the town hall in central Rangoon. They uploaded pictures of Aung San Suu Kyi and Win Myint, and demanded their release.

In many places, blows are heard in pots and pans, which is traditionally associated with the elimination of evil. Protesters are planning new demonstrations on Sunday.

Aung San Suu Kyi has not been seen in public since the coup, but according to a spokesperson for her party, she is under house arrest and is doing well under the circumstances.

UN Secretary-General António Guterres said that the organization’s special envoy to the country had “first contact” with the military, calling for a return of power to the civilian government.

Social media has been shut down

Facebook, one of the country’s most used communication networks, has been shut down. There, a forum for civil disobedience emerged in a short time with calls for a strike. On Saturday, Twitter confirmed the closure of its service, like many other social media platforms.

See also  No commission for storming the Capitol on January 6

Norwegian telecom operator Telenor states that the company followed an order to shut down the country’s entire mobile data network.

“We have staff on site and our top priority is to ensure their safety,” the company wrote in a statement.

The military coup in Myanmar was met with strong condemnation from large parts of the world, including the United States, the European Union and the United Nations.