Why thanksgiving is celebrated with full enthusiasm? This day is celebrated as a national...
HomeWorldSpain: Barcelona protests... 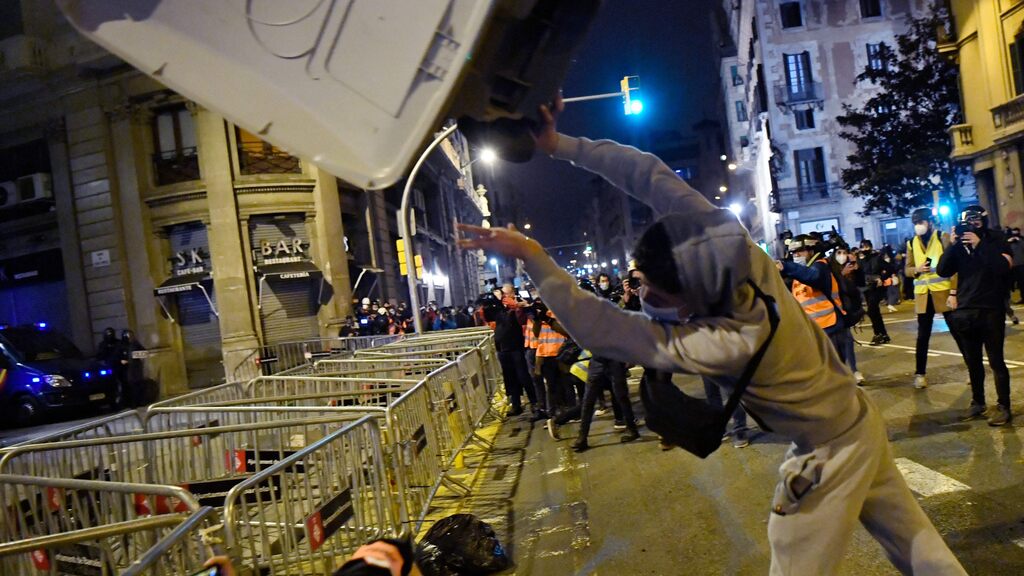 At around 8 p.m. Sunday, hundreds of people gathered for a peaceful demonstration at Barcelona Sants train station. At around 10 pm, police clashed with protesters on Via Laietana, one of the main streets in central Barcelona. Protesters threw bottles, garbage cans and other loose items at police. According to the newspaper Vanguard The police prepared for another chaotic evening and night.

Eight people were arrested Barcelona night, five of them were stolen from the shops after shop windows were smashed. Police say three others violated the order. A policeman was lightly injured in the evening riots.

The protests erupted, Tuesday, when police arrested Pablo Hassel at a university in the city of Lleida, where he barricaded himself with a group of fans. The previous week, he had surrendered to authorities to serve a nine-month prison sentence. This ruling is highly controversial and sparked a debate about freedom of expression in Spain. The scale of the demonstrations grew every night and also spread to other cities in Spain, such as Madrid, Valencia, Seville, Logrono and Malaga. On Sunday, the first demonstration will be held in Bilbao.

The night before Sunday There were 8,000 people on the streets of Barcelona. The unrest erupted when a group broke up and crossed police barriers. A large number of shops were looted in Paseo de Gracia in the center, containers and litter boxes were set ablaze, and protesters threw bottles at the police. The entrance to the stock exchange was set on fire and many windows were smashed in Palau de la Música Catalana, one of Barcelona’s most famous buildings.

In total, more than 100 people were arrested and both police and protesters injured in the protests.

Minister of the Interior of Catalonia Mikel Samper lamented Sunday that what began Tuesday in protesting “freedom of expression” ended with “pure sabotage and looting of stores.”

The ruling against Pablo Hassel applies to Twitter posts and songs in which he accused the rapper of glorifying terrorism, praising guerrilla warfare ETA and insulting the royal family. Hassel was convicted of defamation, defamation, and glorification of terrorism. Hundreds of cultural workers, including filmmaker Pedro Almodovar and actor Javier Bardem, have signed up to a protest list.

The Spanish government promised to review the Freedom of Expression Act.

Read more: Nathan Shahar: The arrest of the Spanish rapper has divided the government