See animals that are no longer there 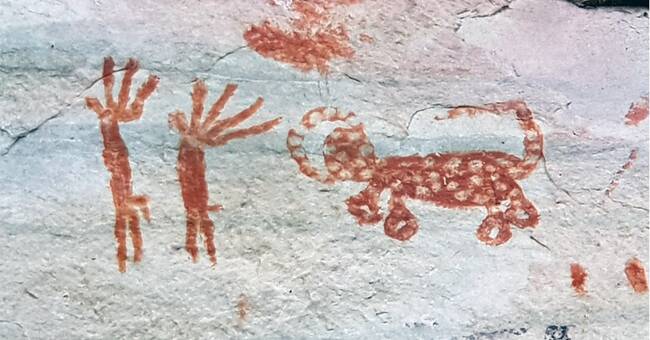 The discovery was made in a part of the Amazon where researchers previously found pictures on rocky walls, painted in the color of dolls red.

During an expedition last year, thousands of new photos were found over a stretch of just over a mile in an area called La Serranía La Lindosa in Colombia.

Some are pictures of animals still living in the rainforests: caimans, monkeys, tapirs, and others.

Animals are presented realistically so that we can clearly identify all species. They agree fully with the discoveries from Ice Age bones, says Jose Ayriart, an archaeologist at the University of Exeter in England and one of the project leaders.

Images of animals and things that humans left in caves in the area allow researchers to prove that the oldest paintings were created about 12,600 years ago.

The paintings give researchers a clear picture of what the area, which is today a dense rainforest, looked at that time.

They showed that this part of the Amazon must have flooded with large forests and grasslands at this time, says Jose Ariart.

Also on the rock walls are portraits of the artists themselves. They are depicted in hunting scenes or when they are bringing food from the plant kingdom. In some cases, they have also put their handprints in rocks. Researchers interpret some of the decorations as scaffolding erected on the rocks to reach the highest points.

Jose Ariarte believed that the people who painted the sides of the mountains belonged to the first groups of hunters and gatherers who migrated to the Amazon from the north. His theory is that image creation was part of their religious life.

Most of the large animals pictured disappeared at the end of the Ice Age. Climate change and hunting are often cited as the explanation behind the extinction. But, strangely, researchers did not find any bones from megafauna in the remains of humans.

– They seem to have swallowed everything they encountered – plants, fish, and animals like caimans, deer, and snakes – but the large herbivores are completely missing in the La Serranía La Lindosa material. Jose Ariart says it looks like they wanted to draw it, not eat it.