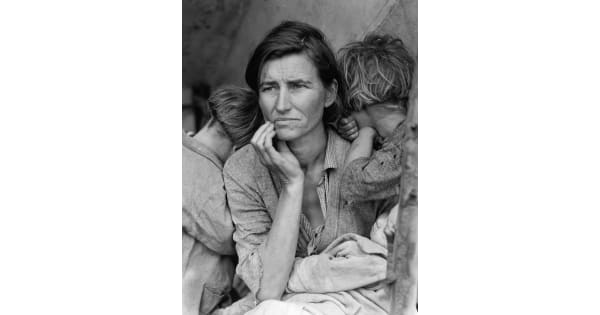 Varmlands Museum opens new gallery with documentaries. It is a self-produced exhibition with portraits of Dorothea Lange from the American countryside during the Great Depression of the 1930s. Time has many similarities with the global situation today. Despite bottom-up economics, mass unemployment, environmental problems, and the nightmare of believing in the future, people have continued to struggle and create a new future for themselves.

In February 1936, photographer Dorothea Lange drove north through California. In the small Nipomo community, she passed a sign that read “Pea Pickers Camp”. Lange was on his way home, exhausted after a month of working alone on the roads. She actually visited several labor camps and took hundreds of photos of people there. However, I decided to return and return to camp. There she meets 32-year-old mother Florence Owens Thompson and her children. Lange takes seven exposures to them. One of these images became known by name Immigrant motherIt is an iconic image of the “Great Depression” and one of the most prevalent images in history.

A camera is a tool for learning to see without a camera.
Dorothea Lange

Dorothea Lange (1895–1965) She began her career as a photographer, but soon her community involvement led her to leave the studio and seek out society with the camera. It was hired – along with other photographers such as Walker Evans, Arthur Rothstein and Gordon Parks – by the Farm Security Administration (FSA) to document the farming crisis in the American countryside. Through the documentary, this government photo project will feature “America for Americans” and increase residents’ support for tax-funded relief efforts targeting poor agricultural workers.

In the United States in the 1930s, dark clouds were rising above the horizon – both figuratively and literally. The deep recession caused mass unemployment and decreased productivity. Meanwhile, the large interior steppe areas were subjected to severe drought, as the drought turned the soil into a dust that was blown by the winds and formed dust clouds 5 kilometers high. Fierce dust storms made it impossible to cultivate the land. Crowds of farmers have been forced to leave their farms and take to the streets to search for work and support their families.

For five years, Dorothea Lange traveled across the United States to photograph the harsh living and working conditions of these people. She produced a comprehensive graphic material detailing fear, despair and loss. But at the same time, behind the filth, poverty and all grievances, there is a sense of strength, pride and determination in these people. At a time when many of the parallels are similar to the global situation today: a bottomless economy, mass unemployment, environmental problems and a nightmare belief in the future, they fought and created a new future for themselves.

The exhibition is produced by the Varmlands Museum.
Credit: Dorothea Lange, Library of Congress Prints and Photographs Division, FSA / OWI Collection
Do not miss this Interactive map With over 90,000 photos from the US FSA project.

Read more about the exhibition
https://varmlandsmuseum.se/utstallning/dorothea-lange/